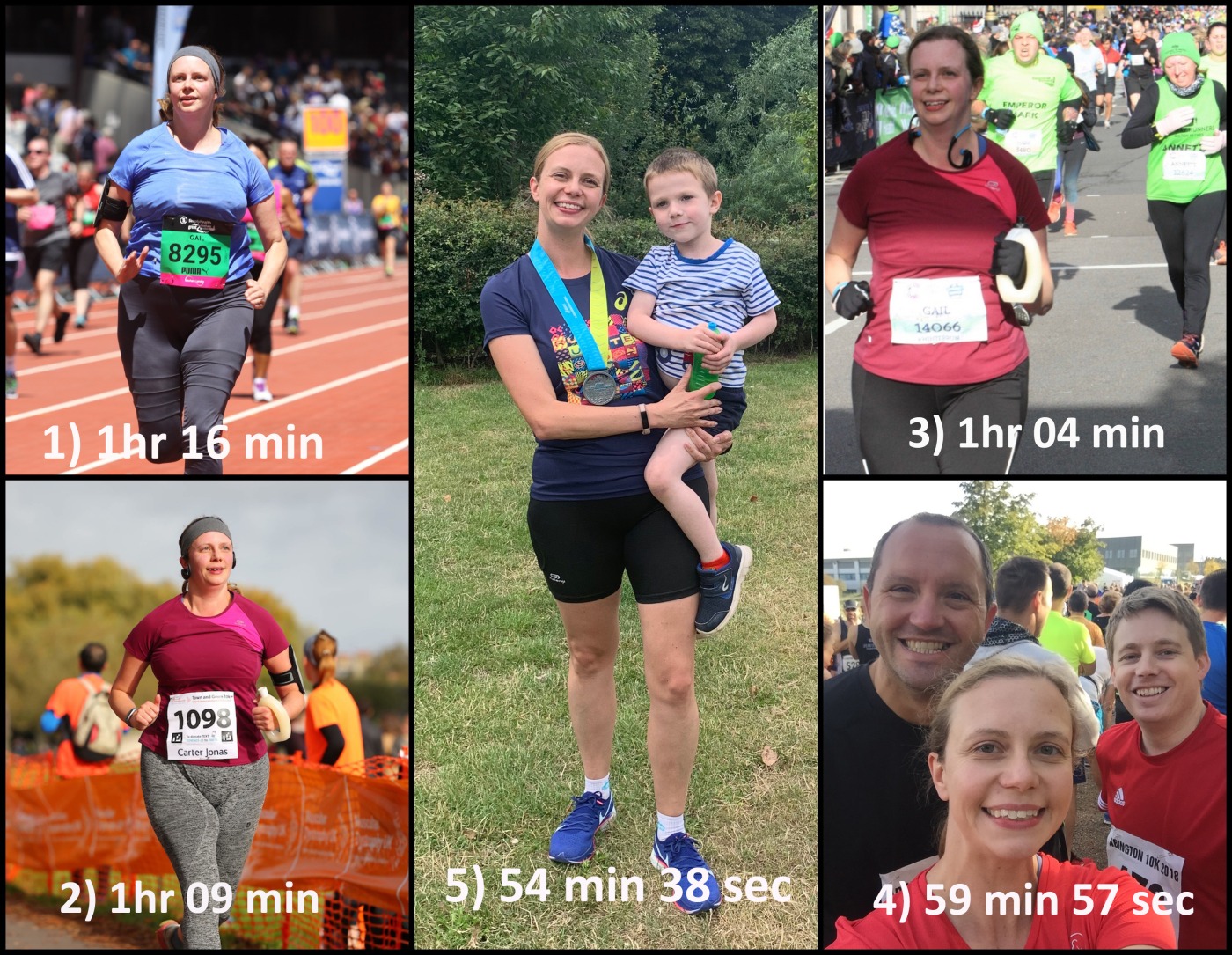 Just over two years ago, I ran my first ever 10 km race at the London Olympic Park, and this weekend, I completed my fifth, the ASICS London 10 km. Its been an incredible two years of running, and these races have been a great way to track my progress, which has seen me knock over 22 minutes off my 10 km PB! Here’s the story of how I managed it:

My first 10 km race! I had been running for a few months by now, but never managed to run 10 km without stopping, and this scorchingly hot 10 km race was no different, as I had to stop and walk up every hill around the undulating Olympic course route, finishing in a rather sedate time of 1hr 16 minutes. Still a hugely memorable race for me, meeting the legend Jo Pavey at the start, and finishing the race with a Usain Bolt channeling sprint down the 100m track inside the Olympic stadium!

A group of my work colleagues had been running this race for a few years, and this was the first year I finally felt brave enough to join them! I had been working on my pacing and stamina over the summer, and really focused on maintaining a nice steady pace which allowed me to complete the whole 10 km without walking for the first time! I finished in 1hr 09, way behind all my friends, but decent progress nonetheless!

By this point I had been attending parkrun regularly for just over a year, and had been working hard on getting my 5 km time down to just over 30 minutes. This focus in speed carried over into my 10 km race, with another decent improvement down to 1hr 04min.

Things were starting to fall into place! I had easily cracked my sub-30 parkrun, was regularly running twice a week, and the weight was starting to fall off! In this rematch of my annual run with work colleagues, I was desperate to crack the 60 minute barrier, and pulled out all the stops to cross the line in 59 minutes 57 seconds! I was ecstatic with that result! At this point I pretty much felt like I had peaked, and wasn’t likely to improve much more than that, until………………

So, so much has changed this year. I’ve been through a whole cycle of London Marathon training and come out the other side a completely different person, tapping into reserves of strength I never knew I possessed. I’d been running four times a week, building in long runs, intervals and trails, and dropped my parkrun time down to 26 minutes. I knew I was in with a good chance of breaking my PB, but how fast could I go?

It was a fantastic morning with so many of my Berlin Marathon training buddies and Twitter friends out in force. I decided to really push myself and follow the 55 minute pacer, which I knew would be quite a stretch. The pacer set off at rather blistering speed, taking me through the first 2km rather quicker than I would have liked, but I was determined to stay on her heels. We passed the 5km mark in 26:40 and I started to worry if I could keep it going. We came out onto the Embankment, Big Ben in our sights, and I started to get flashbacks of the last few miles of the London Marathon where I was running on empty, struggling and close to tears. This time around, however was a different story! The pacer must have realised she was ahead of time and eased back, allowing me to catch my breath, take in the sights and just go with the flow for a couple more km. Before I knew it, we were at the 9km mark and I felt able to push ahead, giving it everything I had to cross the line in 54 minutes 38 seconds!

In each of these five races, I genuinely gave it my absolute best each time. It’s amazing what you can achieve with a bit of hard work and consistency! It makes me wonder where I will be this time next year, is a sub-50 10 km possible?? Watch this space!